BPEL Console get stuck when try to show process tree

Yesterday, I was working together with the project team on a PoC implementation and, when we were testing the BPEL process, we started having some troubles.

After start some new instances, when we tried to view its Audit Trail or its Visual Flow, the new window that usually shows the process tree stayed loading for some time and, after that, showed the message "Unable to display Flowtrace and Faults due to an error while retrieving information from SOA, please review logs for more details".

Trying to find what could be happening, we found a thread of weblogic (at Environment > Servers > soa_serve1 > Monitoring > Threads) that remained executing for a long time and, after a defined timeout (600 sec), that thread got stuck. With some searches at Google and Metalink, we found an Oracle Doc (ID 972013.1 - EM Console Freezes when Viewing a Big Audit Trail in 11g) where a similar problem was described as a Bug (ID 9120676 - STUCK THREADS WHEN VIEWING AUDIT TRAIL IN 11G). As described by the Oracle Doc: "The problem comes during the UI rendering phase when we pre-expand audit trail tree nodes.It is hanging when iterating through recursive\nested 'while' loops for the tree pre-expansion.".

This issue is fixed in 11g PS2 - 11.1.1.3.0 (not available yet), but doesn't have a patch to the current version. As a workaround to view process audit trail and visual flow, you can do the following: 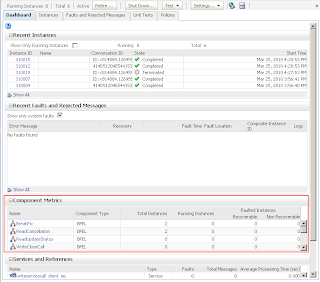 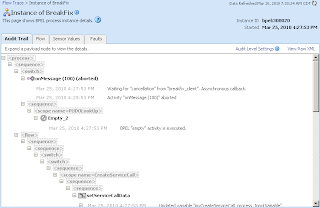 Posted by Rafael Andrade at 9:38 AM